By 1919 there were several 1-room grade schools in the areas around Milam Fork, 4 schools in and around Saulsville, 1 on Marsh Fork, a 3-room school on Milam Fork was to include the 9th grade in 1919, a 1-room school, Pleasant Hill at McGraws, now Ravencliff.  Some other reasons for building a high school at Milam were that new high schools had already been built at Mullens, Herndon, Oceana and Baileysville and also the news of the extension of the Virginian Railroad to Glen Rogers and the opening of the mines at Glen Rogers, Glen Morrison and Meade's Faith Smokeless Coal Company.

In 1919 the SlabFork District Board of Education, cosisting of President H.F. Hartley (Maben), Royston Toler (Mullens), and Perry C. Cook (Meade Poca - now South Mullens) appointed Buren H. Toler principal of Pineville High School, District Supervisor of Slab Fork Schools and Gordon McGraw of Milams Fork as superintendent of Wyoming County Schools.  Both McGraw and Toler were instrumental in the certification of Milam High School. The land on which the new high school was to be built was formerly purchased from Okey J. McGraw and was located near where the John McGraw Grade School building now stands.

In 1919 the District Board held a special levy election to raise $40,000 to pay for the construction of the 6 room high school & grade school, with a classroom laboratory and a classroom auditorium combined, plus separate restrooms for the boys and girls with running water and modern plumbing, plus one water fountain on each floor and basement dressing rooms used separately by the boys and girls basketball teams.

The new high school was completed and ready for school by September, 1920.

The freshman class had the following members: Wirt Belcher, Gilbert Goode, Sadie Cozort, Arthur Brooks, Violet Brooks, Ruby McGraw, & Elsie Goode.  Mae Shumate had attended Mullens High School as a freshman. The other 5 members were allowed to take extra subjects in order to catch up and graduate in 1923. Note: Howard Cozort's name is listed as a freshman in 1921, he graduated in  1927.

The first, 1923, graduating class of Milam High School numbered 6, the largest class numbered 14 in 1939, while the last and smallest class was only 3 pupils.

Some Milam High School highlights were as follows:

In the spring of 1924, Milam's basketball team won a game with Basin by the score of 14 to 0.  The team was composed of Earl McGraw, center, Fird Shumate and Charles Walker as forwards, and Kelly Sizemore and Basil Walker as guards.  The team played in the rejuvenated 3-room elementary/junior high gym.

In the fall of 1927 Milam High School won a basketball game over Mullens. The same fall Milam traveled to Baileysville, played them a game on the outdoor court and was defeated, then on the way back to Milam, played Oceana, loosing by a score of 12 to 7. Bernard Cook and Wayne Rollins were Oceana's 2 star players.

In the spring of 1927, Howard Cozort won first place in the mile track race.  In 1936 Milam played Mullens a game of football, losing by the core of 12 to 0.

In the fall of 1926, Mr. Shafer, the Vo-AG and Chemistry teacher took his vo-ag class boys on a short filed trip above the high school.  Before starting a demonstration, he pulled off his old plug hat and laid it on top of a fence post.  One of his mischievous pupils decided to have some fun, while Mr. Shafer was busy,  he lighted a large firecracker and placed it under Mr. Shafer's hat.  It went off with a big bang and flew ten feet high.  The hat came down to earth causing much laughter, with a large hole in it's top.  Mr. Shafer didn't seem to be disturbed, he picked up his hat placed it on his head and continued the class demonstration until the class period was ended. He wore the hat home, and surprised the boys when he came to school the next morning still wearing the decrowned hat.

In 1924, Earl McGraw, a pupil and janitor at the school, decided to impress one of the lady teachers who had remained after school hours to grade some papers.  Earl went into the school yard and caught his dad's pony by the halter and proceeded to maneuver it up 2 flights of steps and into the room where the teacher was busy.

When Earl finally got the excited and overly exerted pony into the room, it lost its self control and relieved itself on the floor.  Red faced, he hastily found a broom, swept the excretion into a waste basket and carried it outside, went back to apologize to the teacher and then lead the pony back down the steps more red-faced than ever. 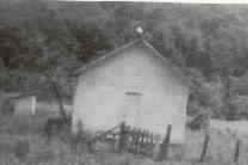 Credit Where Credit Is Due. . .

The following information and pictures were borrowed from another web-site.  The information was compiled by Hursie "Shorty" Shumate and put on the internet by Anita Tolliver McNiel. Hursie passed away in 2000 and Anita discontinued her website in 2008. The company that hosted the website didn't purge the information when they shut down the site. I posted the information here before it was lost.

The link to the original page is provided below. . . 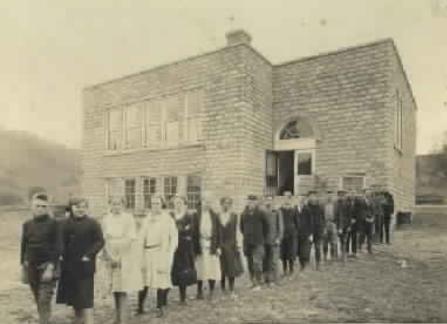 The information  presented above was published to the internet without copyright language by the author or publisher. It is our intent to present and preserve this information for research and educational purposes and we claim no ownership of the material. The material is presented substantially the same as it is currently presented, having only been edited to correct some spelling errors. This web site generates no revenue and we present this to the public at no charge. If you are a person who claims any copyright in the above, please contact us at contactus@mcgrawreunionwv.com